The Bahamas Central Securities Depository (BCSD) and The Bahamas International Securities Exchange (BISX) on Thursday 27 July 2017 paid a joint courtesy call on the Deputy Prime Minister and Minister of Finance, the Honorable K. Peter Turnquest. During the courtesy call, the representatives from both organizations took the opportunity to discuss matters related to the Bahamian Capital Markets.

Craig Tony Gomez, Chairman of BCSD noted: “we were grateful to Minister Turnquest for his kind consideration in allowing us to meet with him, to speak on matters of mutual interest, focusing on the influence that the Government has, directly and indirectly on our capital markets.”

Nerika Burrows, President of BCSD added: “we were able to update Minister Turnquest on the activities of BCSD as it relates to our operations, international affiliations and technological improvements. BCSD currently serves as the Registrar and Transfer Agent (RTA) for the majority of public companies in The Bahamas as well as Payment Agent for some tranches of Government Debt, and so it is crucial that the Government understands our operations in its entirety.” 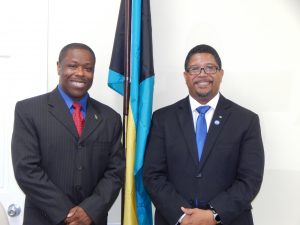 Mr. Keith Davies BISX CEO noted: “Governments and capital markets influence each other greatly through regulation, ease of raising funds and general investor confidence. I was grateful to Minister Turnquest for meeting with BISX and BCSD as our organizations jointly are part of the larger system upon which the Bahamian capital markets operate. I welcomed the opportunity to speak about those areas where the Government can assist the Exchange, and those areas where the Exchange can assist the Government, particularly with the listing and trading of Government securities and the Government’s future privatization plans. I look forward to more constructive discussions in the future.”